All Categories » All Apps
Why does the App Store show a price for your app even though I bought it?
Last Updated 3 years ago

Let's say you bought one of our apps—Moom, for the sake of this example—in the Mac App Store. Some time later, perhaps after buying a new Mac or reinstalling macOS, you go to reinstall Moom: You launch the Mac App Store app, go to the Purchased tab, but you don't see Moom in the list. 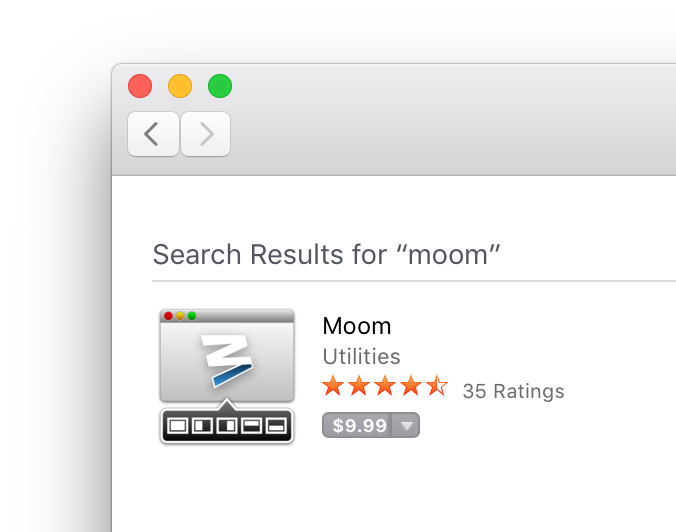 Why isn't Moom showing in your Purchased tab, and why does it look like it costs money, even though you bought it already? Both issues are caused by the same action: At some point in time, you right clicked on Moom in the Purchased tab of the Mac App Store app and chose Hide Purchase from the contextual menu.

When you hide a purchase, it vanishes from the Purchased tab (which makes sense), but also shows the app as unpurchased when you view it in the Mac App Store (which does not make sense). We have heard—but not confirmed—that you won't be charged if you "buy" the app again. But there's a better way: Unhide the purchased app and it will return to the Purchased tab, from where it can be freely installed.

On the Featured tab of the Mac App Store app, click Account, then find the Hidden Items section and click the Manage button. You should then see a screen listing all your hidden purchases, hopefully including the Many Tricks app you purchased.

Assuming you do see the app listed, click Unhide then Done. Now return to the Purchased tab, find the app in the list, and click Install.

Unfortunately, if you don't see your purchased app in the Hidden Items section, you'll have to contact Apple for further assistance, as we are given no information about our App Store customers, nor any way to contact Apple on their behalf.

Powered by osTicket. Copyright © 2020 Many Tricks. All rights reserved.